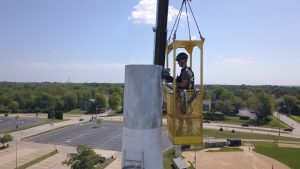 In August 2018, a client commissioned All Energy Management (AEM) to remove a Gaia Wind turbine from the Blackhawk College community campus in Moline, IL. Recently, the client had purchased the turbine and asked AEM to relocate it to Odessa, TX. In addition to Endurance Wind Power turbines, AEM possesses the ability to work with many other turbine manufacturers, including Gaia Wind.

Since nothing was structurally wrong with the turbine, and due to the high quality of Gaia Wind turbines, the decision was made to remove the turbine in such a way that it could be resold, relocated, and reassembled for a new owner in Odessa, TX.

While taking things apart can pose its own complications, disassembling a turbine in a way that ensures preservation creates a greater set of challenges. AEM carefully took this turbine apart so future reassembly was possible. No issues were encountered during the disassembly, packing, and shipping of this Gaia Wind turbine. The project took only two days from start to finish and resulted in a successful removal and resell, satisfying both the previous and the new owner.